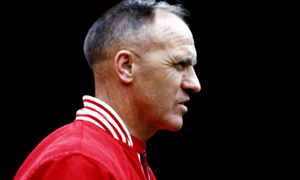 August 17, 1965
Bill Shankly was in his office, sited as close as it can be to the pitch, searching for the right words.

I had asked him what football meant to him.

He stood, looking as if he was poised on the balls of his feet like a boxer, swaying gently forward for a punch, and jabbed a finger at me with his reply:

“It means hard work, aye, that’s what it means,” said Shankly.
“I could give it up if I had another well-paid job to go to.”

Surely not, surely that couldn’t happen, I thought to myself.

And, jabbing again, Shankly contradicted himself and put my mind at rest.

“No, I don’t suppose I could. No, I would have to come back to it. It’s my, well …” and he looked round before he said simply and with absolute honesty, “It’s my life.”

It is too. There entire life but for one segment of William Shankly, a Scot who is mentally explosive and so physically solid, he looks as if he would crack all over, like a stone, if you hit him

Family.
The missing moments of Shankly’s life are spent with his wife and family.
“They’re the only people I am interested in, outside football,” said Shankly.
“I like to go home and be quiet and undisturbed.”

And the story is told of the day Bill went “soft” and, on a big family celebration, took his wife out with him, to stand on the terraces and watch Accrington reserves.

“No, non, nosense,” said Shankly.
“It was Accrington first team. I wouldn’t take my wife to see Accrington reserves,” and he raised the deep bark of a laugh which comes as forcefully as many of his feelings on football.

As forcefully, for instance as his tale of how he started out in football.

“I wasn’t interested in education. Football was the thing I wanted to be educated in. So I left school at 14, not just to be a footballer, but to be a Scottish international footballer.

“I know I was aiming high. But, if you aim as high as you can, do the right things, and believe in what you are doing, you will get there.”

Shankly became a Scottish international, became a manager, became in time the manager of one of the best club sides since the war.

“It was easier when I was a player,” he admitted.
“I had only myself to worry about then. Now …”

The sentence trailed into thin air before he went on to explain that his 12 senior players are still arguing with the club over terms.

Suddenly, and plainly, Shankly was saddened by the thought of being at odds with the men who won the League, then the Cup, and reached the European Cup semi-final.

Team work.
Because to Shankly all football is great effort and great team work.

What he really wants is another crack at Europe’s competitions because when Shankly explains team work as “like soldiers in the front line, one gets shot and another one steps into his place” there is a glint of battle in his look.

But Shankly is not blind to the faults of the game or the men he rules in it. He talked of the embarrassment of losing matches before the Cup Final last year.

“I went round feeling their shirts after one match,” he said.
“I told them ‘Never mind, you are all in the Cup Final team now … unless you get flu. And the way you stood around today I wouldn’t be surprised at that.”

He laughed explosively again at one of the few moments when his anger had partly obscured his pride in them.
Because when Shankly talks of his team normally no praise is too high.

He will say “This one? He’s the best in the country.”
“Him! There’s none better in Europe.”

And of Ron Yeats, his solid, 6ft. 2in centre half, he repeatedly says “He’s a colossus.”

Personally, I would say that Bill Shankly is a pretty big man too.
(Copyright: Daily Express: August 17, 1965, by Clive Toye)