Friday, December 31 – 1965
Let us on the eve of a wondrous sporting year, and I sincerely hope a happy 1966, say phooey and forget the villains of football. Altogether now, three hearty British cheers for the real sportsmen, that’s you, you and you, who make up 99 per cent of the football crowds.

They throw not, neither do they swear, these splendid fans, but they go their way uncheered. Many of them make up the supporters’ clubs around the parishes of football. They are wonderful hosts to visiting supporters’ clubs and make splendid gestures which pass unrecorded.

I made it my business to talk with Tony Pullein, the inexhaustibly enthusiastic secretary of the England Football Supporters’ Association. I wanted to find out which clubs were the most genial hosts. There was no hesitation. Quick as a Jimmy Greaves flick into goal came the answer – Liverpool.

Yes, those incorrigible choristers from the Kop are definitely his top of the pops. He told me that 10 days before a home game they write to the visiting supporters’ club and make them guests for the day. Before and after the match visitors are entertained in a diused cinema which has been lavishly appointed. They are fed, wined – or beered – and the programme includes live shows. The lot!

Some seasons ago a Cup tie in Liverpool was postponed. A London fan – forget which London club – was having drinks with Liverpool supporters. He lamented the facts he could not afford to come up again when the match was played.

A little later the Liverpool chaps said their goodbyes. As the London fan was leaving, the barman handed him an envelope with the comment: “Those blokes left this for you.” It contained six 10s notes. I shall never forget the look on the face of that London fan.

The rivals.
Inevitable rivals to Liverpool are Everton, who have also bought a disused cinema, and insists that only the best is good enough for their guests. Dear old luckless Fulham to the London charts. They have only a small hut, but the welcome is so outsized that whenever Liverpool fans arrive for a game in London they always finish up at Fulham’s little wooden shack.

Newcastle United, those rugged Geordies, travel overnight, to London, play a football match against the home supporters’ club in the morning, have some nourishing ale with their rival supporters after the match, and catch the midnight train back home.

Newcastle, who have not yet been able to raise a building of their own, take their guests across the Tyne to the Gateshead club. And oh! Me lads, you should see those visitors Gannin’ Home.

The fog.
Accrording to secretary Pullein the warm-hearted Northeners win out of sight against the South when it comes to making the visitors feel right at home. In the Midlands Walsall and Nottingham Forest are highly commended. Strike a medal for Carlisle United fans. When they heard Tottenham followers were fogged up on their way to Glasgow for the European Cup match a coupel of seasons back they were at action stations – well, Carlisle Station – ready with tea and sandwiches.

Maybe you have your own favourite club to visit. Let me know on postcard please which club gave you the top red-carpet treatment and we will vote in the Football Fans Champions of 1966. And on that happy note a good New Year to you all – and in this World Cup year get all set to stand up and raise a cheer for England!
(Daily Express, 31-12-1965) 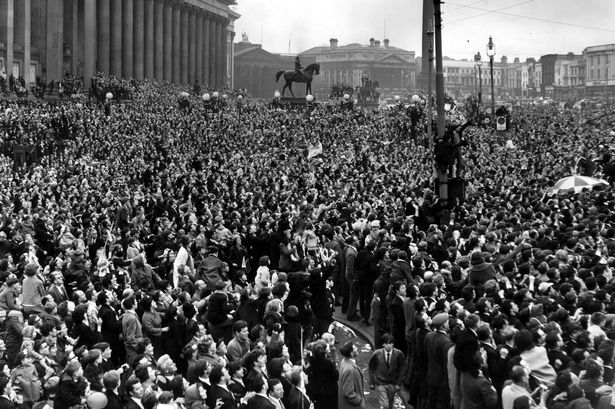