July 24, 1970
Liverpool are ready to spend “considerable” cash on new players if need be – but their aim is to build up the playing strength by grooming youngsters through the junior sides. Chairman Eric Roberts said this at last night’s annual general meeting, on the eve of a season which sees Liverpool competing for the seventh successive time in Europe – a Football League record.

Usually, the “star” performer at those meetings is manager Bill Shankly, with his own brand of trenchant comment on the season’s performances, and a crisp review of the season to come. But after his spell in hospital with blood poisoning he does not return to duty until Monday. So the job of reporting on the club’s affairs fell to Mr. Roberts, and he delighted shareholders with his summing-up.

Outstanding.
He said the club had signed several promising juniors, as well as Steve Heighway from Skem, and Jack Whitham, from Sheffield Wednesday.

“We have players of outstanding promise in the reserve and junior teams,” he said. “The board is prepared to spend considerable sums on players who become available, and whom Mr. Shankly feels will strengthen our staff.
“Yet our aim is to recruit our future strength from our juniors sides.”

Mr. Roberts said the new stand would cost between £500,000 and £600,000 and would be completed by August, 1971. He paid a handsome tribute to the support the club receives, and promised that the board would do everything possible to maintain Liverpool’s eminence in football.

Mr. Eric Sawyer, presenting the financial report – which showed a £36,486 profit – said the overall attendances and average of home gates last season were down.

Re-elected.
The first team had played 26 home games compared with 27 the previous season. The aggregate dropped from 1,264,000 to 1,149,000 – the average from 46,814 to 44,182. But takings from away games were up, as Liverpool had played several more away last season the previous year. The balance sheet showed the club to be sound financially, and they had committed themselves to signing contracts of £478,321 for work on the new stand.

The five shareholders who had submitted nominations for the board – Mr. Solly Isenwater, chairman of the Shareholders’ Association, Billy Liddell, Mr. G.H. Roberts, Mr. J.T. Cross, and Mr. J.W. Smith – all withdrew. 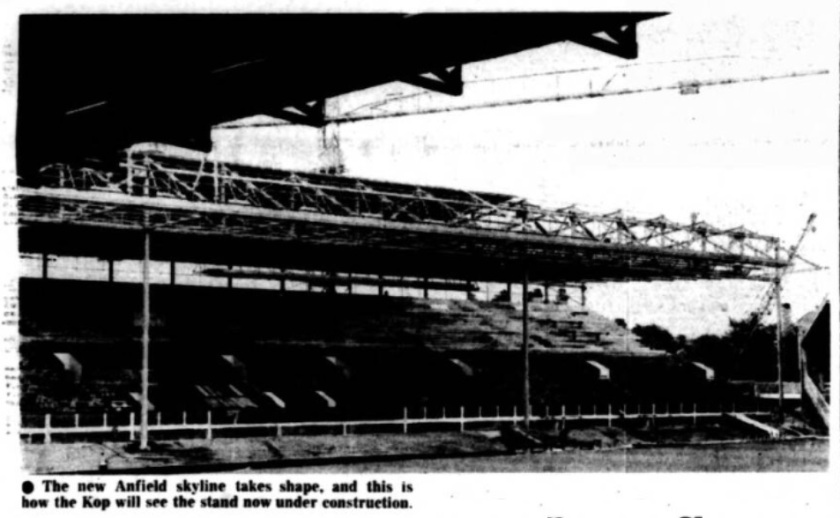