The people who love Liverpool more passionately and more faithfully than most husbands love their wives – the fans on their famous Kop – let their team down on Saturday.
The League Championship Liverpool will now surely win could easily have been sacrificed if the fury of the fans who threw garbage including a broken bottle and a tin can on to the pitch had escalated into an attack on the main target for their anger: referee Peter Willis.
As it was only one customer ran on at him – to offer Willis a pair of specs.
“That was the closest there has ever been to a riot here.” Manager Bob Paisley told me.
“Certainly it was the worst I’ve seen on this ground.”
Searching for charity, he blamed the pressure, which also affected both teams and the crowd. “It made him nervous,” he said.
Kevin Keegan, one of the five players booked, wasn’t as kind. “It proved one thing. When a referee loses control, it breeds crowd riots. For a game like this you need a Clive Thomas.”
I have to agree that the ref was partly responsible – only partly, mind you, for I have yet to see any match official kick a player or throw something at the crowd.
Willis was technically correct, perhaps, in booking Keegan for failing to stand the statutory ten yards clear of a free-kick – although he looked about nine yards and two feet from it.
And Willis was technically correct to book substitute David Fairclough for coming on without permission – though since he had seen Steve Heighway stretchered off, he should surely have been more alert for a substitution. In any case, his gesture at Fairclough to stay off the field could easily have been interpreted as waving the lad on.
Willis cannot be challenged on his knowledge of the written laws of the game. But for referees the most important law can sometimes be on that isn’t written – the law of common sense. This he overlooked.
He didn’t for instance, seem aware that when Liverpool’s Tommy Smith was knocked out in a head-on collision with Ipswich’s Paul Mariner there might be trouble – even though there were distinct warning signs and sounds.
“Tommy’s gonna getcha,” the crowd chanted when Smith finally wobbled erect glaring in Mariner’s direction.
Tough Tommy did “get him” twice in the next ten minutes, remained unpunished and went on to play an eventually outstanding part in Liverpool’s victory.
But the damage had been done. Players on both sides, seeing someone get away with illegality, went looking for the same leniency.
Jimmy Case of Liverpool, and Brian Talbot of Ipswich didn’t find it. They were booked for going in at each other with boot-soles dangerously high.
Others went on getting away with it. David Johnson, the Liverpool striker, was knocked out by another mid-air, head first challenge from Dale Roberts. Heighway had to have five stitches in a cut eyebrow after Mick Mills flattened him.
The match at half-time was a violent, vicious mess, with both captains, Mills and the magnificent Emlyn Hughes, called together by the ref.
Ipswich manager Bobby Robson conceded that Ipswich had now lost the League and Liverpool almost certainly had won – “They want smacking if they don’t make it now.”
After claiming, with some justice, that his team had fully shared all the glory that was going for an hour, he reminisced ruefully about the vital opening goal.
“Seven seconds before it was scored, we had two men on the edge of their penalty area against one, Paul Mariner and Trevor Whymark against Tommy Smith, the hardest man on the field. And we had the ball. Yet he won it, beat them both and suddenly we went one down” – the ball went from Smith to Case to Ray Kennedy for a 70th minutes scoring shot.
Four minutes later, after an exchange between Kennedy and Johnson on the left, Keegan outjumped the earth bound Mills to score the second.
Ipswich got their 86th minute penalty goal from John Wark after Kennedy had handled.
But they still made it a lively finish after another controversial decision by the referee Willis that forced ten red shirts into the penalty area, defending a free kick awarded against goalkeeper Ray Clemence for taking too many steps – and yet another booking – this time, Johnson – for protesting.
“Hands up who wasn’t booked,” joked Kennedy when he got back to the Liverpool dressing-room. The laughter relieved the tension.
(Daily Mirror, 02-05-1977) 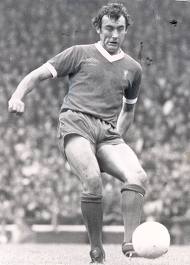