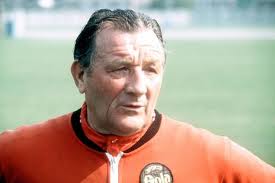 July 27, 1977
The wintry cutting edge to current mid-summer days is as un-seasonal blast for holiday makers but it suits footballers getting ready for the big things to come from August 20. Liverpool manager Bob Paisley, conducting the usual pre-season training routine at Melwood which has paid off so successfully over the years, agreed that the weather was helping his champions in their preparations.

He told me: “It’s more like football weather than summer. But it is good for the lads. They look very sharp and it has been better than training in the heat.

“The training is going very well, and the nip in the air has helped it along. We’ve had a couple of games among ourselves at Melwood and we’re playing another League club behind closed doors on Friday.”

On the player front, Mr. Paisley reported that Phil Thompson, a cartilage operation victim last season which ruled him out of much of the high drama in the best of all seasons, was coming along very well. He said: “He looks all right and is training fully. But John Toshack, although making a good recovery from his Achilles tendon operation, is having to take things more easily. But, generally, everything is going to plan and I’m pleased with the training programme.”

The pressure steps up next week when Liverpool leave for their usual three game stint on the Continent. They start a week to-day, sensationally in a way, with the new Harbour Cup match against S.V. Hamburg and, of course, a confrontation with former Anfield idol Kevin Keegan, who looks to have made the best possible start with his new club.

The Harbour Cup clash was designed to raise some of the cash for Keegan’s £500,000 transfer fee, which Liverpool expect to receive next month.

After the Hamburg game in the World Cup stadium, Liverpool move to Amsterdam to play in the international Amsterdam tournament the week-end after next.

They will be away for six days for the three games which should help to bring them to the right state of readiness for their Charity Shield game at Wembley against Manchester United a fortnight on Saturday.
(Source: Liverpool Echo: July 27, 1977; via http://www.britishnewspaperarchive.co.uk) © 2018 Findmypast Newspaper Archive Limited