August 12, 1977
It is something to smile about, this accusation that Liverpool are mad to pay £440,000 for Kenny Dalglish. Especially when you are standing inside tall, grey walls toppled with broken glass which enclose Melwood, the club’s great sweep of training grounds in the city suburbs.

You are reminded that here is at least one square patch of logic in English football.
Bob Paisley, rotund and unassuming in his red track suit top and baggy black shorts, has a genial managerial style. But his eyes are everywhere. They scan the big timers. John Toshack, so dark from the Mediterranean sun he might pass an audition for Othello. Ian Callaghan telling an apprentice: “If you do the little things the big things will take care of themselves.”
And then to the reserves and the kids.

Paisley tells me: “I just wish people in English football would concentrate on their own problems.

“We won the Championship and the European Cup last spring, but what have we got this summer morning? Nothing.”

There is just a touch of exasperation when you mention criticisms of the Dalglish deal.
“I signed Dalglish because he is a great player. He is not Kevin Keegan, but he is something in his own light and he has been a long time with Jock Stein (Celtic’s manager). That gives me a lot of confidence.

“I know that he has been educated in the game. No corners have been cut.”

Dalglish is relaxed. He says: “Transfer fees and all that stuff are not my concern.
“My business is scoring a few goals. I know I’m quite good at it.

“There is no pressure on you when a club who have just won the European Cup – and won it well – come along to your boss and put down £440,000 for you.

“Pressure is when you can’t get in a team, when you don’t know where your next performance is coming from. I won some things with Celtic and it gets to be a habit. Liverpool will do me fine.”

It is a baking morning but whether you are Dalglish, Emlyn Hughes or Tommy Smith you are watched.

Paisley says: “You can’t build anything without foundation. Some people in football should remember that.”

Tom Saunders, a youth coach with a dark brown Merseyside voice, puts it a little more colourfully. “Lads,” he announces, “at Liverpool we agree with the saying that it is better to be a live sparrow than a stuffed eagle. Let’s get down to it.” 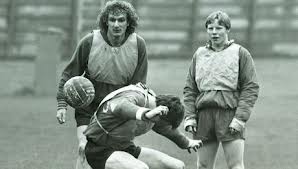