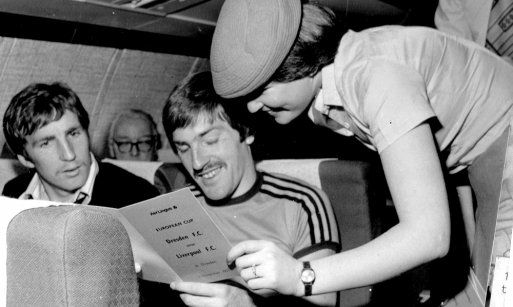 August 1, 1978
Liverpool’s “friendly” against a League of Ireland side in Dublin tomorrow night is likely to be watched by a crowd of around 20,000, say Irish officials. If so, it will more than support Eire internationals.

The game will be played at the Irish R.U. headquarters at Landsdowne Road because it has more seats and better capacity than Dalymount Park, which was the venue for big games up to a couple of years ago.

Irish soccer fans are waiting eagerly for the chance to see the European Cup holders in action and Liverpool manager Bob Paisley has responded to their mood by fielding as full strength a team as he can, injuries permitting.

Only David Johnson, Graeme Souness and Phil Neal are out of the squad for injury reasons.

The invitation to Liverpool to play in Dublin has nothing to do with their signing of three Irish boys from Dundalk at the end of last season – Synan Braddish, Derek Carroll, Brian Duff. Mr. Paisley said: “It is a goodwill trip to meet old friends and make a few new ones.”

In fact, the League of Ireland officials have asked Liverpool to play every year since they last visited Eire about seven years ago. It is a long-standing invitation, renewed with fresh vigour annually, but Liverpool have been unable to fit in a visit until now. They always promised they would return when they could.

With Eire team manager Johnny Giles still playing in the United States for Philadelphia Furies, the Dundalk boss Jim McLaughlin takes temporary charge of the League team against Liverpool. He was at Anfield last season for the Reds’ triple signing of his youngsters and watched Liverpool play Arsenal.

When Liverpool arrive at Dublin Airport this evening, they will receive a presentation of a model aircraft, incorporating a football in design, from Aer Lingus, who have been associated with the club on the majority of their European flights over the past 14 years.
(Source: Liverpool Echo: August 1, 1978; via http://www.britishnewspaperarchive.co.uk) © 2018 Findmypast Newspaper Archive Limited