Friday, October 2 – 1981
Thousands of Soccer fans who once roared for Bill Shankly stood in silence for him yesterday.

The players who worshipped “The Boss” wept in the rain.

It was a sad farewell to the Liverpool legend, the man who never walked alone.

As Ian St. John, one of the Shankly-groomed stars said: “The legend will live on, but I wish the man had been around a bit longer.”

Every one of the 92 Football League clubs sent a representative to the funeral service at St Mary’s Church, West Derby.

Famous managers like Sir Matt Busby, Jock Stein, Tommy Docherty, Lawrie McMenemy, Ron Saunders,  and Bob Paisley, the man who succeeded Bill Shankly at Anfield, stood side by side among the mourners.

All of them ready to admit that their own success was due in no small part to the help and advice they received from “Shanks.”

Players like Denis Law and Roger Hunt went to Shankly as boys and became stars wept openly at the service.

It was covered in red roses and carnations – the colour of his beloved Liverpool.

Mr. Shankly’s widow Nessie – he retired from Liverpool to spend more time with her – walked alongside their daughters Jeanette and Barbara.

Some time soon Mrs. Shankly will take her husband “home.” In a private service his ashes will be scattered on the Anfield pitch.

In his address at the service Ian St. John said: “We were honoured players to have a man like Bill Shankly to take us to his club and mould us from boys into men.

“He gave us all the attributes you need in life – play the game hard, play it fair, think of your fellow players and people around you, and always try to be honest in whatever you do.”

The Rector Canon Arnold Myers also paid tribute to Mr. Shankly who died in hospital on Tuesday from a heart attack, aged 67.

He said: “Bill Shankly would have complained about the lengthy of the words, discipline, determination, dedication. But in these terms he was a 3-D man all-right.”

Mrs. Shankly had asked for donations to the British Heart Foundation, but a dozen floral tributes were laid outside the chapel.

They included a huge floral crest of the club’s Liver bird emblem from everybody at Anfield.
(Daily Express, 03-10-1981) 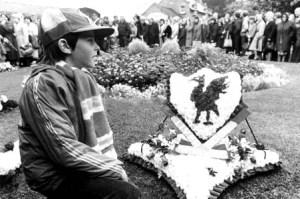