Friday, February 22 – 1991
Kenny Dalglish fought back tears yesterday as he left his Merseyside kingdom. Ten days before his 40th birthday the player who won almost every honour in the game with Celtic and Liverpool before transferring his genius to the manager’s desk, told a stunned, hastily-called Press conference:
“Kenny Dalglish is a person who has pushed himself to the limit. The biggest problem was the pressure I was putting myself under because of my desire to be successful.”

Dalglish added: “I’ve been involved in football since I was 17 and for the last 20 years I’ve been with the two most successful football clubs in Britain. I’ve been in the front line and this decision is a result of those years at a very high and successful level.
“The pressure is in the build-up to matches and the aftermath of them, although I still enjoyed coming to the club and working with the players.
“It’s a decision that many people will find difficult to understand, a decision that only I could have made.
“And it would have been wrong to mislead people that everything was fine with me.”

The timing of Dalglish’s walk-out, with his champions top of the League, and an FA Cup fifth round duel against Everton going into its third installment on Wednesday, makes it an even greater sensation than Bill Shankly’s shock retirement in 1974.

And with more than a touch of irony, yesterday’s official announcement by chairman Noel White came in Anfield’s Bob Paisley Suite, named after the manager who signed Dalglish from Celtic for £440,000 in 1977 as Kevin Keegan’s replacement.

Since then eight League titles, three European Cup triumphs, two FA Cup successes and four in the League Cup competition have adorned Dalglish’s career as Liverpool player and manager. The first the club knew of Dalglish’s decision was at his scheduled meeting with chairman Noel White and chief executive Peter Robinson on Thursday morning.

An emergency board meeting was staged that night when the club pleaded with Dalglish to reconsider. But the man, thrust into command of English football’s flagship in the grim aftermath of the Heysel tragedy in May 1985 and who then had to lead his team through the heartbreak of Hillsborough four years later, told them his decision was irrevocable. Dalglish broke the news to his players at 10.30 yesterday morning before they set off by coach for Luton. Chief coach Ronnie Moran was placed in charge of the squad to prepare for today’s League clash.

White, who became chairman last May in succession to Sir John Smith, said at the conference: “I regret to announce that Kenny Dalglish told the board yesterday of his wish to retire.
“He has assured us that there is nothing we can do to alter his decision. We have no wish to see him leave but reluctantly have to respect his decision.
“We wish him every success for the future and we part on the most amicable terms. It goes without saying that he will always be welcome here at Anfield.
“He was an outstanding player and his career as manager was every bit as successful.
“This is a very sad day for the club, a very sad day indeed.”

An emotional Dalglish, tears welling in his eyes, added: “This is the first time since I came to the club that I’ve made a decision that is more beneficial to Kenny Dalglish than Liverpool FC and everyone connected with it. It was not a decision that I woke up one morning and thought was a good idea. It’s one that took me a long time to come to.

“Most importantly, the worst decision was not to have taken any decision.
“I just felt that I’d gone far enough and didn’t think I could delay any longer. If I had delayed, it certainly wouldn’t have been beneficial to me. And if it wasn’t beneficial to me I don’t know how it could be beneficial to the club.
“There is no animosity whatsoever between myself and the club, the board of directors and the players.
“It is something obviously I felt was right. If you say it wasn’t a good time I don’t know what a good time.
“I feel a bit relieved that I’ve been able to tell the chairman. I couldn’t have had any better times anywhere else.
“There are no problems whatever with the players or the club … it’s just me as an individual that is the problem.
“And the best way for me to solve the problem for myself is to take this action.
“People might feel disappointed but I think I’d have been more disappointed myself going into the end of the season and knowing in my own mind that I wasn’t perfectly happy in doing it.
“The club have been magnificently to myself and obviously I’ve got tremendous respect, esteem and gratitude to them. And everything I’ve said is relevant to the fans as well.
“I told the players and from most of them the reaction has been shock.
“I just hope the players can finish off what they’ve started. They’ve got themselves into a great position in the League and are still in the Cup.
“And I just hope they can continue for the rest of the season as they have done in the previous part of it.

Dalglish, asked if he might ever return to football said: “It’s always a possibility that I might but I would never do anything without consulting this club first. I’ve no plans to do anything.”
(Daily Express, 23-02-1991) 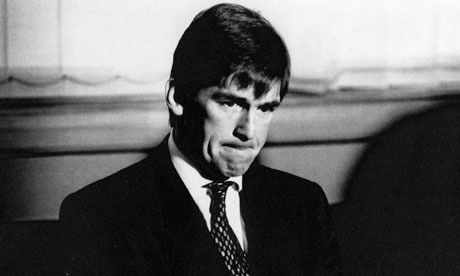