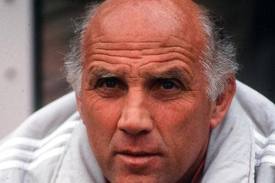 Saturday, February 23 – 1991
Caretaker manager Ronnie Moran is the even money favourite to succeed Kenny Dalglish, say bookies William Hill. He will be given a few weeks to prove himself. But if he fails there are other candidates at Anfield.

Roy Evans, who works with Moran coaching the senior players, has also been at the club since he was 15. He’s a former England schoolboy player now aged 42.

Phil Thompson, the former England and Liverpool skipper, is in charge of the reserves. He might lack experience. But then so did Dalglish. Thompson is Liverpool born ex-defender who returned to a backroom job with his old club five years ago after spending his last season with Sheffield United. A Scouser through and through, he joined as an apprentice in 1971 and went on to share some of their greatest successes. Won 42 caps with England. Now Anfield reserve coach.

Ron Yeats, the defender of whom Shankly was so proud and is now the club’s chief scout, can also be considered.

Club captain Alan Hansen has also been heavily backed on Merseyside. Locals are betting on him as “the man in charge for the first League game of next season”. Bought by Bob Paisley for £100,000 from Partick in 1977, polished by Joe Fagan, it was Dalglish who groomed Hansen for leadership.

Graeme Souness. Has transformed the face of Scottish football over the last five years. As captain, led Liverpool to their last European Cup to crown six years at Anfield before quitting to play in Italy. He returned in April 1986 to manage Rangers and used his Liverpool knowledge to good effect to take them to three championships and four Skol cups.

Former centre-forward John Toshack became the youngest manager of Real Madrid at the age of 39. Took them to Spanish title but were sacked because of European Cup failure. Now back with his first Spanish club, Real Sociedad, the 41-year-old former Welsh striker made his managerial name with Swansea taking them from the fourth to the first division in five years. Began his playing career with Cardiff and moved to Liverpool for £110,000 in 1970. He scored over 100 goals in seven years at Anfield and won 25 Welsh caps.

Phil Neal, current Bolton manager who is no longer the best of mate with Dalglish who sued him over references in his book “Life at the Kop” four years ago. The England full back – 50 caps – quit Anfield when it was clear there was no place for him in the backroom of the club he had joined 11 years earlier from Northampton.