In this article I will tell you about my meeting with the West family and what I have found out about the man who was the Liverpool F.C: auditor of years’ long gone by.

One could feel the proud satisfaction of the West family in West Derby when visiting them in mid-May, 2015, presenting them with information about their great grand-father and grand-father – Mr. Joseph West, and explaining his connection with the Liverpool Football Club.

It all started with a message left on my blog from Mr. Peter West in early May this year. Peter had googled the name “Joseph West” and found an article about the obituary of Mr. Simon Jude. I knew that Mr. Jude was an auditor for Liverpool Football Club from 1892 until his death in 1921. Simon Jude ran an auditor firm in Liverpool under the name “Simon Jude and West.” The West in the Company name was, of course, Joseph West. 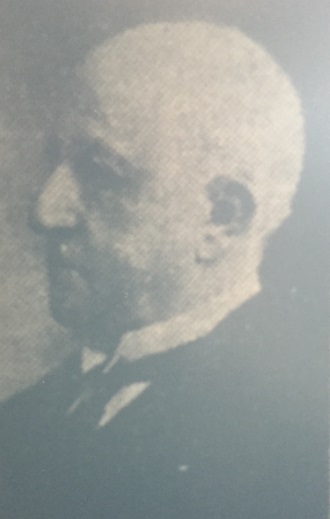 The message on my blog read: “Hi there, Mr Joseph West who was a partner in the Liverpool firm was my Great Grandfather, email me if you would like some more info.” An email led to a conversation over the phone, and fittingly enough since a trip to Liverpool was on the agenda within days – the phone call led to a meeting with the West family. They had something exciting to show me about the connection between the West family and Liverpool Football Club.

It was on Thursday, May 14, that I got into the taxi outside the Liverpool Central Library and politely asked the driver to take me to L13, to an address close to the “Jolly Miller” pub in West Derby. For a LFC-historian like me this was like Christmas Eve. West Derby is important in the early history of my favourite football club and it was the place that was so close to the heart of the founder of the football club – Mr. John Houlding.

Upon arrival I met Peter (56) and his lovely wife Cindy, and at the apartment of Peter’s father – Donald (88) greeted us. Donald is locally known as ‘Doug’ and entering his apartment was like stepping into a family LFC museum. There were Liverpool memories on the walls in all shapes and sizes, and there was the cabinet the family wanted to show me.

A golden plaque on the cabinet revealed the secret. The plaque read: “Presented to, Joseph West, Esq., by the Liverpool Football Club and Athletic Grounds Co. Ltd. An appreciation of his services since the clubs formation. 1892 – 1930.”

The cabinet must have been an expensive gift in its day. It looked like a table, but you could open it up and it revealed a set of glasses, small and large in size. Doug said it used to have a greyish cloth covering it, and he believed it to be an original card game table with special features. 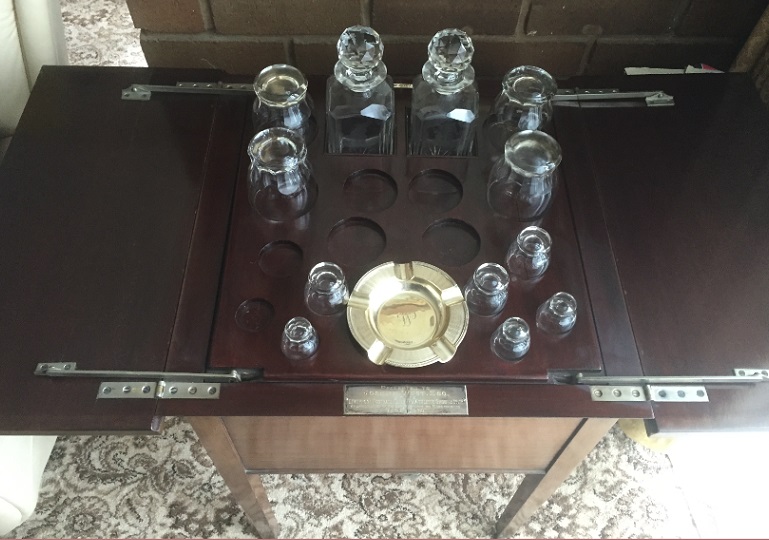 As I shared the information I had found on Joseph with the family they told stories of their connection with the football club, and their newly found passion for family research. Cindy and Peter had made their own family tree, starting with Peter, then adding his father and grand-father, great grand-father, and so on. The West family have connections to Lancashire going a long way back in time.

Mr. Joseph West was born in Abram, near Wigan, in October, 1856. I will let his obituary from the Liverpool Echo from January 3 – 1933 tell his life story.

“Mr. Joseph West, head of the firm of Simon Jude and West, chartered accountants, 11, Victoria-street, Liverpool, died this morning at his residence, 15, Allerton-road. He was in his 77th year.

“Mr. West was a native of Wigan, and was educated at the Grammar School there. He came to Liverpool as a young man, and was employed with the late Mr. Simon Jude in the office of Harmood Banner and Son.

“As a young man he was greatly interested in amateur theatricals, and left Harmood Banner’s to join the stock company at the Rotunda Theatre, Liverpool. Then he played in a similar company at Plymouth, and for some time after toured the country with other companies. Even when he rejoined the profession in which he started his business career, he maintained his interest in the stage, and was a regular visitor to various Liverpool theatres.

“In 1891 Mr. West joined the late Mr. Simon Jude in the present business. Mr. Jude was one of the first men to qualify under the Royal Charter given to the Institute of Chartered Accountants. Since then the firm has continued to grow, and to-day it is one of the largest of its kind on Merseyside. Mr. West had been head at the firm since the death of Mr. Jude in 1921.

“Football secretary.
“Mr. West had a long connection with the Liverpool Football Club and Athletic Grounds Company, to which concern the form had acted as auditors for many years. Mr. West was the club’s secretary until the advent of the new Companies Act, which prohibited an auditor from holding the dual post of secretary. His services were recognised by a presentation at the annual meeting of the club a few years ago.

“For many years Mr. West was secretary to the now defunct Liverpool Brewers’ Association, and he was prominently connected with the Liverpool and District Mineral Water Manufacturers and Bottlers’ Association.

“He had considerable Masonic experience, and was at one time a member of the Merchants’ Lodge.”

From other finds I have collected from the libraries I can also add that Mr. West seemed to have been in charge of the finances of the charities connected with Liverpool F.C. Up until World War 1 LFC had its annual “Football Gala” and Mr. West was the secretary for this organisation. This charity helped Liverpool F.C. get a strong foothold in the city immediately after its foundation in 1892.

And through his connections with the Brewers’ Association I have seen his name mentioned in articles with the LFC founder John Houlding, John’s son – William Houlding, and LFC’s first chairman – Mr. Edwin Berry. Mr. Joseph West had a very strong connection with the football club for more than 40 years!

Doug and Peter also wanted to show me a copy of the share certificate for Liverpool Football Club from 1981. These shares were obtained when Gillett and Hicks purchased the club, but Doug and Peter made sure they kept a copy and framed it. Also in the memoirs are a champagne bottle connected to the 1986 FA cup final with Everton. 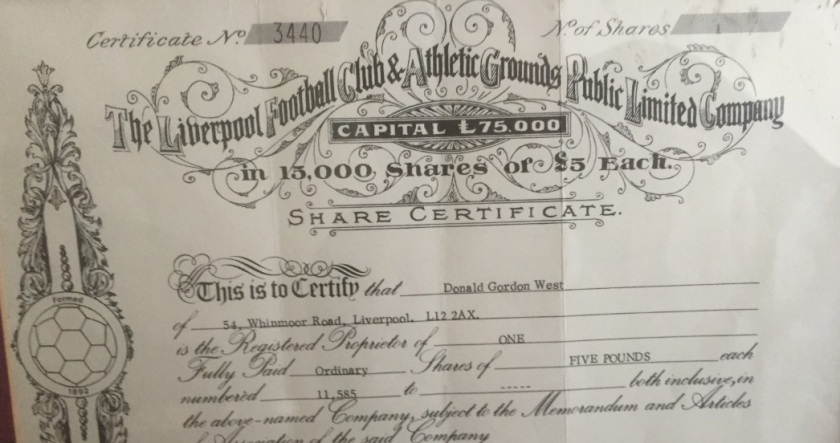 I hope I have done Mr. Joseph West and his family proud with this article. He is an unknown person in the history of Liverpool Football Club as we see it to-day. But going back to the 1890s, the early 1900 and the roaring 1920s one can picture Mr. West as an important brick in the puzzle of our club. The doors at Anfield were always open for him. He served our club till the end and he will never walk alone!