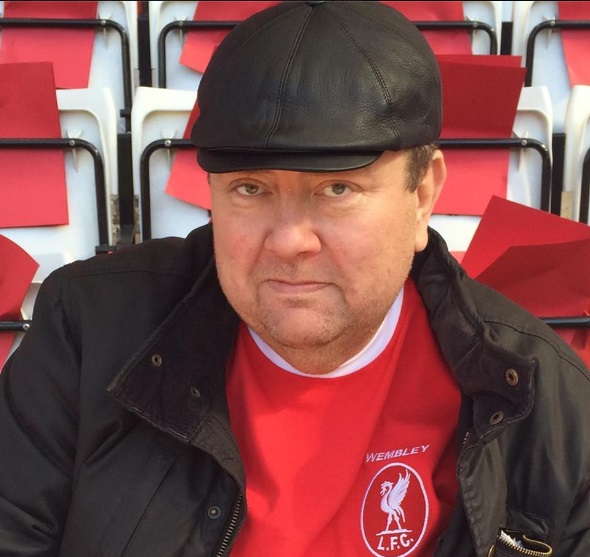 I am not a native of Liverpool, nor do I hold a UK citizenship. In fact I was born around 1,300 miles away on a cold afternoon in Oslo, Norway. This was the late 1960s and colour TV was about to revolutionize the media world by pushing black and white pictures over the edge.

I was seven years old when my aunt went on a short holiday trip to London in 1975 and brought back two football shirts. One blue and one red. Her son got the first pick – and he chose the blue Ipswich Town shirt. The red Liverpool shirt was handed to me, and my mother almost immediately embroidered a number “7” on the back. She later confessed she had a TV crush on Kevin Keegan.

I grew up watching the weekly live match on Norwegian TV every Saturday during the football season – with my red shirt on – whether Liverpool played or not. As you can see, no Shankly, no history swayed me towards the red shirt – but it grew proud on me. After a few years it did not fit anymore, but I remember my mother ordering me a LFC mirror with pictures of all the trophies the club had won. Still, that was neither the reason for me falling in love with them.

And over the years the bond has been strong. I have been to Liverpool numerous times after my first visit there in 1982 with my family, then with the supporter club in 1986 and on my own for pre-season in 1991. I sold my flat, paid down the mortgage and took the profit and went to Liverpool for 10 days. Why? Because it was like coming home, or belonging to something special that kept a fire burning inside me.

At some point I started looking into the history of the club. I wanted to know more about the years before I was born, about the start – and all the years’ in-between. It has become a passion and the website, or blog you read this post on I have spent four years filling up with transcribed articles. There is not a banner or advertisement on my blog – why should I make money on something that has brought me so much joy and unforgettable moments throughout the years?

Now, 41 years after I got my first shirt – I am suddenly not worthy of being a supporter anymore. Even though I have lived in the UK since 2001. I am one of those being blamed for taking tickets for home matches away from the locals. I am a Scandinavian and together with the Asian we are the ‘black death’ of supporters.

If you do not know what I mean have a look at these:
This first post is from the very well-known and informative Liverpool Fanzine “Red all over the land”. 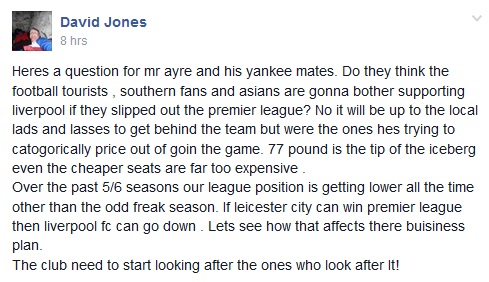 The other one is from “This Is Anfield.” 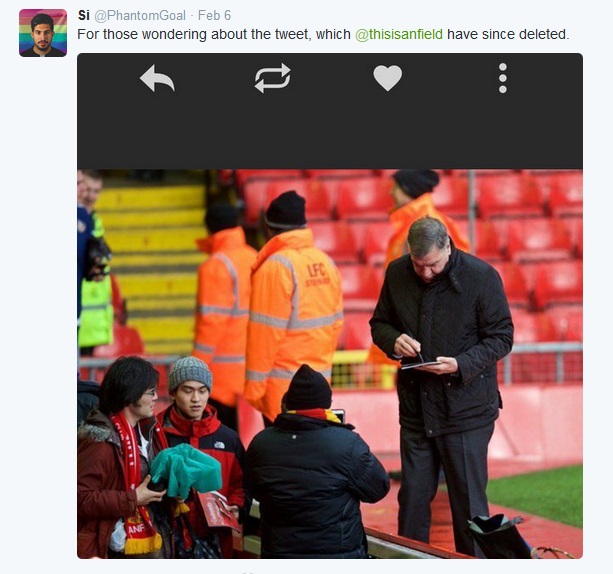 How can serious LFC sites/fan groups allow such comments/posts that can only spread hate towards other Liverpool supporters?

Oh well. There might be more important things in life than fighting to be worthy of a lost cause.

If you are a die-hard local with the same attitude described above, try to answer these two questions.
(1) Why are mid-weeks game almost never sold out?
(2) Do you know locals that have sold tickets on the “black market”?