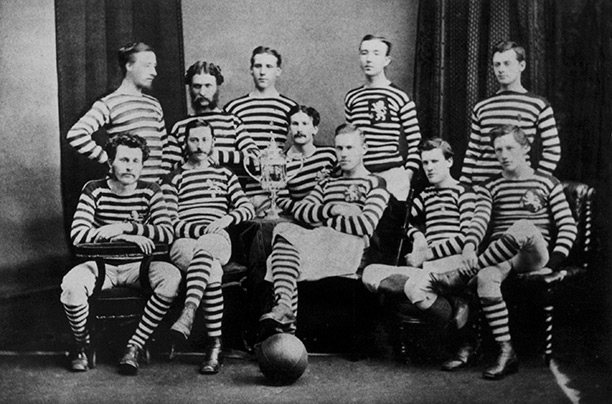 As was to be expected, from the great interest taken in the progress of this cup competition even during its preliminary stages, a large and enthusiastic gathering of spectators, numbering, perhaps, over 2000, mustered on Hampden Park, on Saturday, to see the final tie for the trophy played off between the two leading Association Clubs – the Queen’s Park and Clydesdale.

The Queen’s Park of course had almost walked through the various ties in the competition, defeating Dumbreck seven goals to none, the Eastern by one goal to nothing, and the Renton by two goals to nothing; while the Clydesdale, who had to meet more formidable opponents in the 3d L.R.V., the Granville, and Blythswood, eventually defeated them by two, five, and three goals respectively.

To say that the game on Saturday was equal, and in some respects superior, to the late International, as some of the spectators seemed to think, is more than discretion will warrant.

The ground was rather rough, the grass tufty, and this, combined with a strong gusty wind, did not improve matters; for nothing detracts from the appearance of an association game, no matter what the ability of the players may be, so much as rough ground; and, above all, strong gusty wind.

The game on both sides was very wild at first, and only developed into the expected brilliancy in its later stages.

Fully half an hour after the game began an incident occurred, which raised the excitement of the spectators to fever heat.

After repeated kicks from the Queen’s Park corner flag, a hot scrimmage occurred right in front of the goal, and Messrs. Taylor and Campbell being cleverly tackled by Messrs. Gibb, Anderson, and Wilson, the former made a smart shot, which just cleared the tape; and in a second scrimmage, Mr. Raeburn kicked the ball into the mouth of the goal.

Some of the spectators who were near the fortress thought that the Queen’s Park had lost their first goal – indeed, the thing was so close, that one umpire declared a goal, on the grounds that Mr. Dickson was behind the tape when he stopped the ball, but the other gave no goal, and the referee settled the matter by endorsing the latter opinion.

Shortly before half-time, the Queen’s Park forwards, prominent among whom were Messrs. W. Mackinnon, Leckie, Weir, and McNeill raised the siege in splendid style, and for a short time Mr. Gardner, the Clydesdale goal keeper, had a hot time of it.

The goal, however, was ultimately relieved by Messrs. Wotherspoon and Hendry after being pluckily kept intact by Mr. Gardner.

On ends being changed, the Queens Park, with the wind at their backs, had the ball in front of the Clydesdale goal forthwith; and if the Queen’s Park citadel had been threatened previously, the Clydesdale one was now in a “parlous” state indeed; and if ever a goal-keeper did his work gallantly and well, it was the Clydesdale captain.

Shot after shot from backs half-backs and forwards of the Queen’s Park came fast and furious, and brilliant runs were made up to the verge of the fortress by Messrs. W. Mackinnon, Weir, Laurie, Leckie, and McNeill, but all were admirably stopped short of their aim by Gardner, and eventually the ball was sent well down the field by Mr. Hendry.

Then followed a good run against the wind up to the Queen’s Park goal, in which Messrs. Kennedy, Anderson, Lang, Gibb, and Wilson were conspicuous; but it came to nothing, as the tide of war turned back at once – a run being made by the Queen’s Park up to the Clydesdale fortress, where, at twenty minutes before time was called, Mr. Wm. Mackinnon finished a splendid piece of dribbling by sending the ball clean through the Clydesdale’s goal, over the keeper’s head – a piece of play which was loudly cheered.

Ends changed once more; the Queen’s Park had the wind in their teeth again; but after a few neat shots by the opposing backs, W. Mackinnon piloted the ball well up, passed it over to Weir, who in turn sent it to Leckie, and the latter adroitly put it through the goal with his left foot.

With this double disaster to nerve them, the Clydesdale fought nobly to retrieve themselves, but without avail, and the game was won by the Queen’s Park by two goals to nothing, after a splendid contest, in which both teams, as we have already said, ultimately played magnificently.

As was natural, the Queen’s Park team gave evidence of their more lengthened training in the greater precision of their play, and the admirable way that they passed the ball on from one to another as opportunity served and circumstances required.

The ability of the Clydesdale, again, was conspicuous in the individual efforts of different members of the team. Mr. Gardner’s goal-keeping has been already mentioned as worthy of the highest praise – which was freely accorded to it on the field – and there needs only be said in addition, that it undoubtedly interfered with the fate of the match.

The Association Cup, which was the prize competed for in this match, has been exhibited for the last few days in the window of Messrs. George Edwards & Sons, Buchanan Street. It is a very handsome affair, valued at 50 guineas, and is surmounted by the figure of a player in the act of dribbling, the attitude and position being taken from the “Graphic”, in which appeared a neat sketch of the first International Match between England and Scotland.
(North British Daily Mail, 23-03-1874)