Saturday, January 10 – 1931
There are many followers of football who labour under the delusion that the duties of a football captain begin and end with tossing for choice of ends. Let me say at the outset – the toss at the commencement of a match is the smallest duty which falls to a captain. To be elected the skipper of a team is an honour of no mean order. It signifies leadership in every sense of the word, and in my opinion ideal captains are born not made.

In the first place the captain is the official representative of the players with regard to the management. Any complaints by players should go through the captain, who can place them in the right quarter.
Secondly, it is his duty to see that any plans of campaign which the Club management might have agreed upon be carried out. Moreover, in the event of such plans not proving successful during the game the skipper must have the courage to alter them. In other words, he must right the wrong.

These duties naturally involve keen judgment and a sound knowledge of tactics. In addition, he must be a student of men. It is a position, in many ways, not to be envied, for the skipper must study the temperaments of his colleagues; know just how to “rub them the right way,” and be able to preserve harmony in the camp. If he can do that he is an invaluable person to a side.

In passing, let me give you my impression of the ideal captain. He is my present captain Jimmy Jackson, a great footballer, a great gentleman, the perfect skipper. Being at present vice-captain of Liverpool, I am in a position to know just how he makes our team into a band as happy as schoolboys. He has the sympathy so necessary to a leader. He never attempts to govern or rule, but rallies the boys around him by his very genuineness.

Now Liverpool have become famous as the team which is never beaten. I do not say this with any idea of swank, but results have shown that we do fight like bulldogs to the last gasp. Jimmy Jackson is chiefly responsible for that. In numerous matches we have been losing every time and Jackson has rolled up his sleeves, gone here to help the half backs, gone up among the forwards urging them on, and all the time he is shouting words of encouragement to his men. It makes you play. It is very like an officer encouraging his soldiers in a charge. He had that spirit which imbues you with the desire to save the day. Times out of number we have done it.

Jackson has the happy knack of never upsetting his colleagues by continually  shouting unnecessary instructions to them. When he speaks it is something worth saying. That is just what one expects of a captain. No one minds him giving instructions as long as they have the virtue of being useful. No doubt there have been many captains who have thought that to shout all the time was the correct thing. Well, there is a time and place for everything, and too much shouting tends to make players, especially young ones, nervous.

A player of experience possessing the attributes I have mentioned generally makes a good captain. This is chiefly because of his knowledge of the arts of football. I am of the opinion that the wonderful success of the Arsenal and Sheffield Wednesday is in the main due to the studied captaincy of famous players. They know football inside out, and have such foresight that they can change a plan of campaign, make a positional charge, or exploit a particular move with unfailing judgment.

I suppose, were one to go through all the teams in the Football League, that the majority of captains operate at centre half. Well, it is certainly the ideal position. A pivot is in continuous touch with every player. He is thus able to give his instructions quietly and unobtrusively. In other words, he can do his job without making a song and dance about it. That is just what is necessary.

Mark you, I do not say that just because a man plays centre half that he must be handed the reins of captaincy. You must select the right man, the most experienced man, the person who knows human nature.

If every footballer would realise this we should quickly see an end to those deplorable incidents when players crowd round the referee like a crowd of women round a bargain counter, all asking for an explanation at the same time. That procedure gets you nowhere. The referees of to-day are quite willing to explain why they have done this or that if they are approached in the correct way. That is, to stand back and let the captain ask him politely.

The referees’ chart states that a player may enquire from the referee as to his decision, but it is much better and certainly more gentlemanly to allow the captain to do so. The captain’s task is no sinecure, but it can be made exceedingly pleasant if he will study his men and they will study him. That is the chief secret. A level head, a stout heart, and a happy temperament will make a good skipper.
(Exeter and Plymouth Gazette, 10-01-1931) 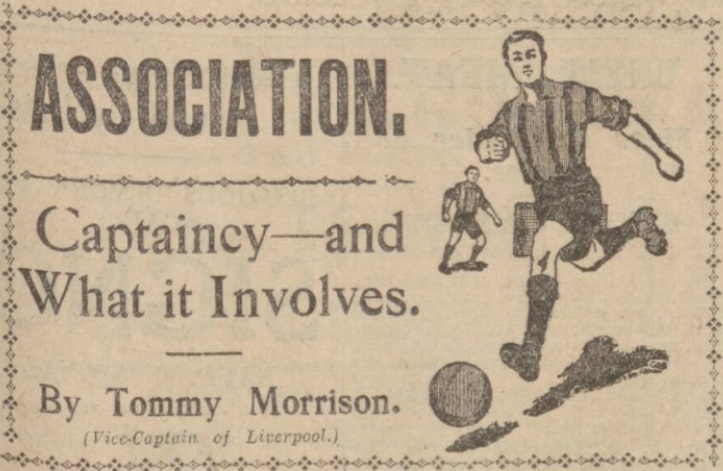