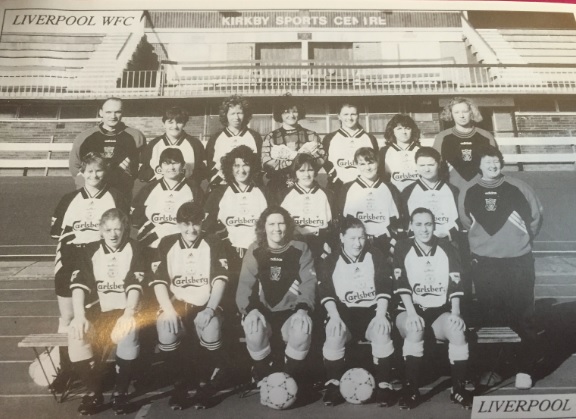 Sunday, March 19 – 1995
(From the match programme of FA Cup semi-final between Bristol City and Liverpool).

Visitors to he Village
The club was formed in May 1989 under the name of Newton Ladies but in June 1991, they changed their name to Knowsley WFC and became affiliated to the first National League and in Knowley’s first season, under the guidance of Liz Deighan, they finished fourth in the Premiership. During the close season of 1992, Knowsley strengthened their squad with the addition of a number of England Internationals and as a result the 92/93 season saw them finish third in the league and also play in the League Cup Final at Wembley where they were beaten by Arsenal.

Liz Deighan retired as Manager in the summer of 1993 and Angie Gallimore, who was player/manager at Wigan Ladies and a former England International, took over the hot seat. She found success right from the start, as they finished third in the Premiership and reached the FA Cup Final and only lost by a single goal to the Doncaster Belles. The start of this campaign sees another name change to Liverpool F.C. Ladies with the support and backing of the full Liverpool side. Recent signings of Tracy Davidson, Jan Murray and Louise Ryde from the successful Doncaster Belles, has trengthened Liverpool’s challenge.

Pen Pictures.
Liverpool FC Ladies have played in the last three rounds of this competiton, all at home, beating Surbiton 8-0, Notts County 5-0, and Croydon 3-0, so they can certainly score goals and defend very well. Their two major Sponsors are ADIDAS and LITTLEWOODS HOME SHOPPING.

Let’s meet the girls.
Angie Gallimore (Player/Manager) Age 33 Textile Manageress.
Ex-England International. Now in her 2nd season at Liverpool. Recently moved from Wigan Ladies were, as Player/Manager, she led them to the NW league Championship and the First/Second division Cup. Gained 35 full England caps until a serious knee injury interrupted her international career.

Jill Thomas (defender) Age 31 Wardess.
Liverpool goalkeeper for most of last season, although she prefers an outfield position. AWFA Cup winner with Leasowe’89.

Sammy Hayward (midfield) Age 23 Sports retail Co-ordinator.
One of the younger squad members but already an established player at both club and international level for England.

Maria Harper (forward) Age 32 Policewoman.
Ex-England international, who is still capable of playing for her country. Also at Leasowe in 1989.

Gayle Formston (forward) Age 19 Purchase ledger clerk.
Recent acquisition from neighbours Leasowe and scored on her debut for Liverpool against her old team. A good prospect for the future and a renowned goalscorer.

Paula Oldham (midfield/defence) Age 20 student.
Another signing from Leasowe this season. Versatile utility player who has settled well in to the squad.

Liverpool FC Ladies have enjoyed much success in their short History and look set for more in the future and will provide formidable opposition for Bristol City this afternoon.
(Maggotsfield United match programme, 19-03-1995)