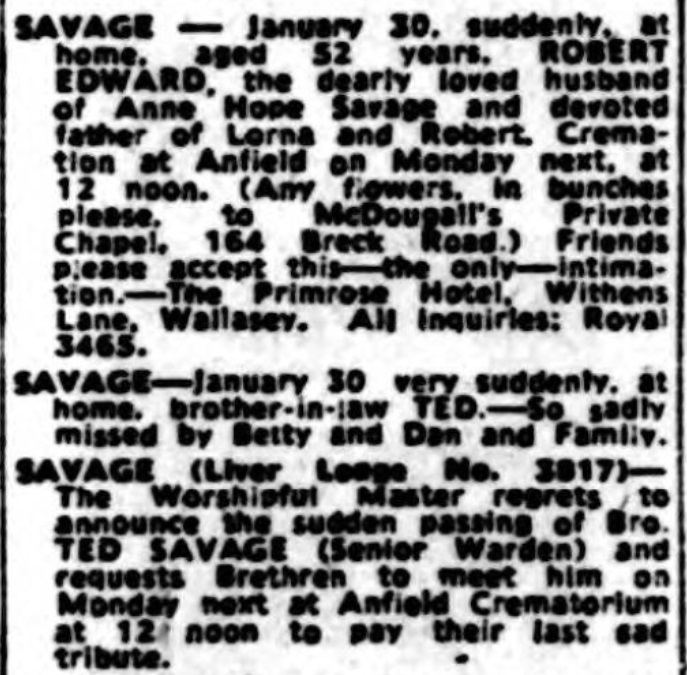 January 30, 1964
The death occurred at his home in Wallasey last night of Mr. Ted Savage, the former Liverpool F.C. half-back. He was 52, and died in his sleep.

Earlier he had attended a Masonic function in Wallasey. He had suffered some heart trouble in the last year or two. He leaves a widow and a son and daughter. For some years he had been licensee of the Primrose Hotel, Withens Lane.

Ted Savage, a strapping six footer, joined Liverpool from Lincoln City in May, 1931. Leicester City and Arsenal were other clubs who had sought his services. Liverpool transferred him to Manchester United in December, 1937. He had played in every half-back position during his career at Anfield. Later he played for Wrexham.

After the War he had a coaching job in Holland, along with Jesse Carber and Duke Hamilton, before he became team manager at South Liverpool.

In his footballing days Savage was an all-rounder. He played cricket, won prizes at swimming and made a reputation as a sprinter.
(Source: Liverpool Echo: January 30, 1964; via http://www.britishnewspaperarchive.co.uk) © 2018 Findmypast Newspaper Archive Limited