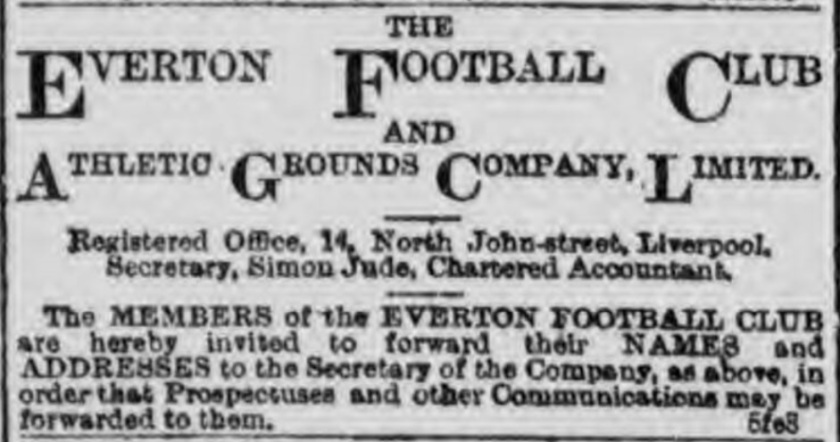 I have come across a new article that tells a story from the 1892 split within the Everton Football Club (which of course led to the formation of Liverpool Football Club).

Newspaper reports regarding the split is not very neutral. They were either very pro the Clayton/Mahon part and anti Houlding; or they were pro Houlding and anti Clayton/Mahon.

The article transcribed now is pro Houlding and is from Cricket and Football Field, dated February 6, 1892. The article look at the formation of the second Everton club at the time (Everton Athletic). In other words it covers the coup attempt by Houlding & co to kidnap the Everton name through the Companies House.

The grand coup at Everton
Go where one might on Saturday the subject was the “dishing” of the Clayton etique, as it is termed in contradistinction to the Houlding ditto. Well, I have heard and read some remarkable things about the proceeding.

During the last twelve months or more the president has been attacked by a clique. He took it in wonderfully good part; he defended himself quietly but firmly, until the small majority which styles itself the whole club suddenly resolved on the suggestion of one man, to bring about a species of dissolution of the club.

Then the tension became too strained, and Mr. Houlding becomes the assailant in turn, and, like the practical man which he is, his action was of an eminently practical turn. The club was registered. Even then he did not act on his own responsibility. It was with the concurrence of a large number of the old members. In fact, a similar course was urged upon him two seasons ago, but he told me that he would much rather that the idea of a company should be taken up by the club.

He was averse to anything savouring of coercion, if I may use the phrase, but when it comes to a question of being dictated to by a few “nobodies” who have done nothing since they joined the club but create differences and air their hobbies, it was quite time to show that he was not to be browbeaten, and that he would maintain not only his own interests but the interests of the large number of members who wish to remain where they are.

When Mr. Houlding was persuaded to save the club from being blotted out by purchasing Mr. Orrell’s ground, he had no alternative; he had to buy the Walton Breck Road lot as well as the portion used for football. He did this against his better judgment, and entirely in opposition to the advice of his legal adviser.

The man who is causing all the trouble was a mere boy when the men whom he now tries to trample on were working hard, devoting not only their time but their money to keep old Everton afloat.

The cloud darkens.
Some time ago I recommended moderate counsels in dealing with the difficulties surrounding us at Everton. I felt satisfied that if the President had been approached in the proper spirit he would have granted almost any concession. That policy has not been followed, but instead there flourished one of “Stand and Deliver,” as one of the members put it.

Is it fair to browbeat and bully a man who has in years of adversity been the very life-blood of the whole concern?

When they could barely afford one hundred a year did he insist on having his four per cent?

We know he did not.

His words were “I have no wish to cripple the club, and if you cannot afford to pay more I am satisfied.”

There was an innate loyalty to principle in this sentence, which proves that had he only been given credit for what he had done the present sad state of affairs would never have come to pass.

It is an injustice to the public, who are after all the real supporters of the club, as one good gate realises more money than a year’s subscriptions by the whole body of members.

Here we have the President concerned, as it were, by a small majority of the whole club, i.e., there were only 80 out of 498 members present at the general meeting when the first resolution was passed, and at no time during the evening did the number reach one-half of the club. It was then, I think, only a reasonable demand that was made, viz., that a poll of the members should be taken on the question.

Why, in many places where a vote of importance is taken a two-third majority is necessary, and seeing the vast interests at stake here I think a similar course ought to commend itself to the prime movers.

The last phase is the most extraordinary of all. Here we have a couple of representatives of one section of the Committee representing their case to the English Association, the other side being unrepresented, and in this un-English style the Court sits and gives judgment. It seems to me that they might have waited until they had both sides of the question before them, or until they were applied to recognise the new Company.

What the outcome will be, unless wiser counsels prevail and a compromise is arrived at, I cannot pretend to predict.

Will no person of sufficient influence, from outside the parties concerned, step in and act as mediator?

Should each party persist in going its own way it simply spells ruin to the club which has taken so many years to build up.
(Source: Cricket and Football Field: February 6, 1892)