Liverpool, as is their habit, gave their supporters a fright. Till five minutes from the finish they were “down” 1-3, and did not look like getting near their opponents, press hard they did. They were not worth a draw, because they showed none of the alacrity the Bolton forwards evinced. Bolton did not do the major portion of the attacking, and were a shade lucky to find Buchan’s goal allowed. Middlehurst‘s injury was not a fake and the blocking kick that he got caused him to fall to the ground, what time Buchan went on with the unexpected chance and scored with a rasping shot.

Further fortune came when Longworth, trying to kick hard and clear, made a perfect centre to Roberts. On the other hand, Banks had Lansdale well beaten when the ball hit the foot of the upright. Although these pointers are mentioned, the fact remains that Bolton were the more convincing side. Of course Liverpool always do the unexpected, and they followed their unexpected win over Everton with a slashing finish, in which Pagnam and Mackinlay got very popular goals.

The Liverpool club deserves congratulation upon their decision to allow the sixpenny spectators into the Kemlyn-road stand. There is no rhyme or reason in keeping the stands empty while supporters on the Kop are drowned by the rain, but it must be remembered that the club has to keep in mind the future, and if on later dates a slight rainfall should ensue an invasion of the stand the club would have reason to complain.

That is why there is always reticence regarding the concession of stand accommodation for sixpenny spectators. However, Saturday was nothing short of a vile day, and the club will not lose anything by giving up the stand to the cheap-priced ticket holders. Considering te elements the crowd was remarkably numerous – there were about 5,000 spectators.

They relished the game and the finish. In the gloaming Pagnam started the “rush” business after a day’s work that had not been of his calibre, and Mackinlay clinched matters in the nick of time. Prior to that Banks, Buchan, Roberts, and Smith had scored – not as given in another paper published in this city. The goals tended to liven the proceedings, and the best shot of all was Buchan’s. Scott handled it but could not stop the ball crossing the line.
…
On the Liverpool side we had the pleasure of watching a St. Helens grown product, Bamber his name, and class his method. A trifle slow and sometimes bewildered in his new sphere of football, he shaped quite well for a beginning, and the club is to be congratulated upon finding a lad of unusual promise, so far as style is concerned. Goddard was the best of a good half back line, and Middlehurst played in more like his opening game’s style – robust and daring. Bar his one error, Ephraim Longworth got through his usual big dose of work, and once he travelled to the forward end of the field and made a good show at scoring. Scott was safe, and had no chance with the shots put past hime. Forward there was at time a deal of nice combination, but the centrepiece did not get into his stride – thanks to Rowley – and Henderson was not a success at outside left. Banks was out of gear when the goal was near his foot, and the better wing, was without doubt, the right wing pair, consisting of Watson and Pinkney. The game was a hard one for the players, because of eighty minutes’ football on the stretch, no interval being allowed through Bolton arriving at the ground in time for a start at 2.45 instead of 2.30. Their motor-journey must have been an exhilarating business.
(Liverpool Echo, 06-12-1915) 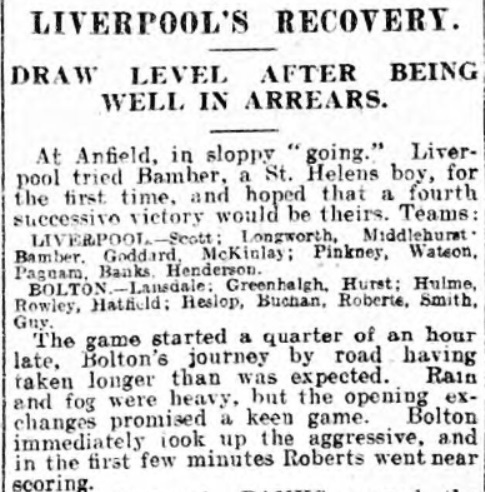