February 12, 1918
In the city of Liverpool the adherents of Association football have had the rare privilege of watching Fred Geary, Jack Southworth, Alexander Young, Bert Freeman, and Bobby Parker play centre-forward for Everton, while George Allan, Sam Raybould, Jack Parkinson, and Fred Pagnam have filled the same eventful position for the rival club Liverpool. 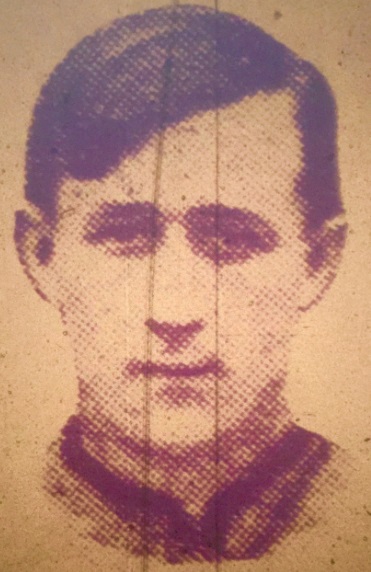 The first man I ever saw play centre-forward for Everton was Nicholas John Ross, but that is merely by the way. With such experiences over many years the people who dwell on either bank of the Mersey are naturally confident they know a centre-forward when they see one, and at the present time they pin their judgment to Thomas Bennett, of Liverpool. With their verdict it is impossible to disagree.

Bennett has bounded to renown during the war. He is the discovery of the emergency football of the period and has won such a reputation since November, 1916, that his future will be subject of tremendous curiosity when the fighters come back from the battlefields of two continents.

Trained in Canada.
Born in Walton, Liverpool, in 1891, he played as a boy at inside right during one season for Venice Street School. When Thomas Bennett was 12 his father, who was a seafaring man and a good runner, especially over a mile, emigrated to St John’s, New Brunswick, and took his family with him. For three years the youth did not play football, but when his folks went further west to Montreal he became attached to the Montreal Royal Rovers, and remained six years with that club.

He was their inside right, shared in the honours of the local league, and in his last three seasons took part in their “international” match between England and Scotland. He was also one of the Montreal team against Toronto, and in his fifth year appeared against the Corinthians when they visited Canada. For two months in his fourth campaign with the Rovers he helped the Charlestown club at Boston, where Stanley Fazackerley was playing at inside left.

Advised by Mr. W.G. Hay, a Scottish referee across the Atlantic, to return to England, he re-crossed the ocean. Glasgow Rangers, Newcastle United, and Liverpool were on the look-out for him, but the late Mr. Tom Watson had the advantage, as Bennett’s friends lived in his natal city.

However, in November, 1913, Bennett turned out for Everton Reserves against the Marine, a local team, and scored three goals, but after a month’s trial as a centre-forward he was not retained.

Remarkable scoring.
At Christmas (1913) Bennett joined South Liverpool and registered 14 goals in 13 matches, while in the following season (1914-15) he helped himself to 34 goals in 23 games, chiefly at centre-forward for South Liverpool.

At the commencement of 1915-16 we find him with Leeds City in a front line consisting of Fanny Walden, Tommy Bennett, John Edmondson, Arthur Price and Fred Croot. Although generally Walden’s partner, he occupied the three inside positions in the course of 18 matches between September and February 5, but he only got four goals. While with Leeds his health was not satisfactory, and he resumed his connection with South Liverpool. There he remained until November 11, 1916, when Liverpool had to visit Southport Central just at the time that Fred Pagnam had joined the artillery, and on the day that Ephraim Longworth was playing for the League in the Cameron benefit match at Newcastle.

Although he did not score at Southport or in the next two matches, his display against Everton at Anfield on December 2 stamped him as a dashing raider, a fine leader, although moved to inside right because of Pagnam’s visit, and a deadly shot. Within the next few weeks his position as the centre-forward was assured beyond question. In all he obtained in 1916-17 22 goals for Liverpool – 19 in League games and three in an ordinary club match against Leeds City at Newcastle.

During the present campaign he scored in every match from September 1 to December 8, and up to February 9 his bag was 35 goals. The net result is 57 goals in 49 contested, in the course of which he has secured three goals against Bolton Wanderers, four against Port Vale, five against Rochdale, and two in a match on thirteen occasions’ Centre-half backs, left backs and goalkeeper are now all bent on foiling Bennett, and still he scores.

Bennett’s characteristics.
The Liverpool centre does not owe his success to mere physique, for he is only 5ft. 7½in. and 11st. 5lb. With a slight tendency towards roundness of shoulders, and his arms hanging like loose ropes, he looks even less. Like so many football players he carries himself in a style which does not suggest the athlete, although sturdy on his legs. As he blows into the palms of his folded hands, like John Tyldesley used to do, he is not an impressive figure until the ball comes his way, when he is impelled by instantaneous activity, and becomes quite another man.

His speed is an asset, and be assured that he does not slouch near goal. Immediately he brings a ball right under control, and with a swerving dribble, often veering to the right, he is an adept at creating a position. Like Harry Hampton he makes most use of his right foot, and aims accurately from many angles and with little space to fire at. His heading, especially at centre into the goal area, is a move to beware of.

But whatever he does is clean work, for he gives and takes with honest shoulder work. The distinguishing characteristics of his play are quickness of movement near goal and sure shooting.

When he bursts between the backs his terrific oblique drive just as the goalkeeper may think that the danger is passed, is worthy of Steve Bloomer in his prime. One might be tempted to think that his love of scoring would make him selfish. But he distributes the ball as freely as impartially, and as accurately as any centre seen for some years, while the goals credited to his immediate supporters – Arthur Metcalf and Harry Lewis – prove that he is a comrade and a help to them.

In all the Liverpool matches – including the three ordinary fixtures with Everton in which they scored 11 goals – Liverpool have now credited themselves with 98 goals, a total which they should advance into three figures next Saturday. Last season they only registered 80 goals, hence they seem like eating their previous best and creating a record for themselves that will require breaking. Of the 98 goals Bennett has, including non-competition games, scored 36, Lewis 23 and Metcalf 16 – the three inside men thus being responsible up to date for 75 goals for their club.

Bennett is not a centre who requires all the work doing for him except putting the ball into the net and has nothing to give in return.

Wholesome and Painstaking.
Bennett, who married in Canada, is a ship’s plumber. That is his trade, and since the outbreak of war he has been engaged on repair work at Harland and Wolff’s ship-building yard, so that he is doing what is required, week in and week out. I do not know him, but a friend who takes a particular interest in his welfare writes me: –

“Bennett is one of the most unassuming and gentlemanly footballers I have met. Quiet, steady, clean spoken, clean living, he takes great care of himself, for he is temperate and a really genuine chap.”

It is well to know these things, for he most successful men in any walk of life are generally the most painstaking, the most attentive to detail, and careful of the gifts of Dame Nature.

His father takes a deep interest in the career of his lad “Tom,” and is hopeful of a younger brother who gives promise in the South Liverpool team. If he means to maintain the family reputation for Sport he has a task.
(The Athletic News / Sporting Chronicle: February 12, 1918)