August 15, 1892
The number of spectators who witnessed the opening practice on the Liverpool ground, at Anfield Road, last Wednesday night, is a favourable augury of the season which is now rapidly approaching.

Quite 6,000 people were present, and the utmost anxiety was shown by everyone to note the “points” of the new men. The old favourite Andrew Hannah received a welcome heartier than bestowed upon any of his colleagues, and Wyllie and McLean also came in for a cordial reception. I may mention at the outset that the turf was in splendid condition and resembled more a cricket than a football enclosure.

The Liverpool Executive have taken and rented, as a dressing-room, a house, at 27 Kemlyn-drive, the backdoor of which adjoins the players` entrance to the ground, and it contains ample bath and other accommodation both for visitors and home players. The services of three competent trainers have been placed at the disposal of the committee, and the one finally selected will be placed in charge of the dressing-rooms.

Some brilliant play, both individually and in combination, was witnessed. Miller, Smith and Wyllie worked together beautifully with the result that Miller scored two grand goals, Smith also obtaining a third. There can be no doubt that Miller will prove a real acquisition to the Liverpool club. All the spectators were delighted with his rare turn of speed and his brilliant shooting, and moreover he is unselfish to a degree.

Ross, who is of average height, repelled a number of determined onslaughts in smart style, and twice ran out and effected clever saves whilst surrounded by opposing forwards.

Both Hannah and McLean were in the pink of condition, their tackling and fine kicking powers being the subject general approval. Kelvin was unfortunately struck with the ball during practice, and the blow caused blood to flow rather copiously. Kelso is a fine athlete, standing 5 ft. 10 in., and looks the picture of his brother “Bob” of Everton and North End fame. In fact the spectators were continually shouting “Bravo, Bob“.

McBride is on the small side, but tackles fearlessly, and is evidently worthy of his reputation. Richardson, late of the 1st King’s (Liverpool Regiment), is a sturdy centre half, he stands 5 ft. 6 ½ in. in height, and scales 12 pounds. He played a clinking game, often robbing his opponents.

From what I saw of the players I am convinced they will make a formidable team, and I quite expect to see them head the Lancashire League and accomplish something remarkable in other ways.
(Field Sport: August 15, 1892, by the signature: TATTLER) 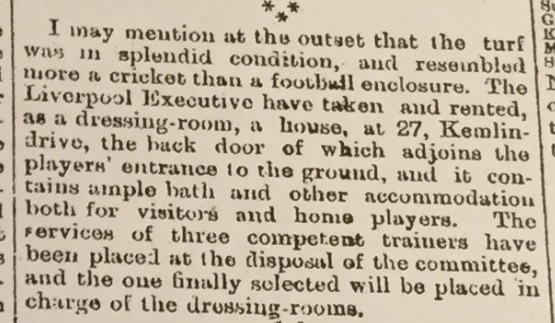