August 27, 1894
The prospects of the Liverpool Club are of the brightest character. A retrospective glance at the club’s but brief history is so pleasing and eminently satisfactory and honourable to its founders that a sanguine feeling is bound to prevail in the minds of the club’s immediate supporters.

With a greatly enlarged and improved enclosure – in which the fine turf plays no insignificant part – an augmented list of players of repute, an excellent list of first class fixtures, and the old astute executive officers in command, it but requires the same loyalty on the part of the team as hitherto to bring about something approaching the magnificent successes of the past.

Many good judges who have seen them in their practices have come to the conclusion, with reference to the strength and capabilities of the team as at present constituted, that the club ought to occupy a fairly high position in the League.

The forward rank, though improved by the accession of Kerr and Drummond, require licking into a shape expected of a first class organisation. The defence as of yore is exceptionally strong, and it is a moot point whether any club is so well off in this respect.

As goalkeeper the club command the services of William McCann, who has gained a high reputation in Scotland; John Whitehead, the late custodian of the Caledonians; and, last, Matt McQueen, whose displays in the onerous position last season were of the highest quality.

In addition to the pair of backs who have so grandly defended since the club’s formation, two others have been secured, and, if their exhibition at practice is worth considering, then Abel Hughes and James Cameron are a distinct gain to the titular club.

The old and well-tried half-way line are wisely undisturbed, and in Matt McQueen, Joe McQue, James McBride, and John McCartney the club possess a quartette which any club might be proud of.

The forwards are not so evenly balanced as the other parts of the team, but it remains to be seen how the new men will develop. The combination of Patrick Gordon and Malcolm McVean is all right, and this pair, providing they keep in condition, may be relied upon to contribute their share of work.

Unfortunately Jimmy Ross seems to be of a fickle mind, and now, after attaching himself hand and glove to the Liverpool Club, has forwarded a communication to the secretary expressing his determination not to play.

Harry Bradshaw, John Drummond, John Givens, and Hugh McQueen are the players eligible for the left wing, Neil Kerr is the only candidate for the centre position, and from what has been seen of him during the past week seems a most capable man; but, unluckily, during the practice on Saturday last he had the misfortune to injure his shoulder blade. What makes the matter so serious is the fact that he may not be able to play against the Rovers next Saturday. It is imperative that a good reserve centre forward shall be obtained.

In anticipation, and rightly so, of great increased attendance, the committee have worked a great change upon the ground. The improvements and alterations have completely varied the aspects of the old Anfield ground. About the only fault which could be found with the ground – in being too narrow and cramped on either side and the inadequate means of exit – is now entirely removed, but owing to the brief space of time at the disposal of the club, the arrangements are but of a temporary character, and will be thoroughly carried out next year.

With this view in mind, the new grand stand which has been erected upon the land lately acquired from Mr Orrell is so built as to be easily removed when the occasion demands. It is a really handsome and commodious building. It measure 360ft long, and has eleven tiers of seats, beside a balcony at the back 4½ft in width, and is computed to seat 3,000 spectators comfortably.

The roof has been placed so that even when standing up in the balcony at the rear every portion of the field is visible. The space between the stand and the touch line is occupied by a platform of three rows of good width, and is estimated to accommodate close upon 2,000 spectators.

The total capacity of the ground now is reckoned at about 25,000. Had time permitted, the goal stands, like those of Goodison Park, would have been covered over, but it has been decided to postpone that improvement. It may be safely stated that the directors of the two leading local clubs have shown an enterprise and go-ahead persistency worthy of all praise as having placed the seaport city in possession of undoubtedly the two finest grounds in the country.
(Source: Liverpool Mercury: August 27, 1894; via http://www.britishnewspaperarchive.co.uk)
© 2018 Findmypast Newspaper Archive Limited
(Evening Telegraph: February 25, 1901) 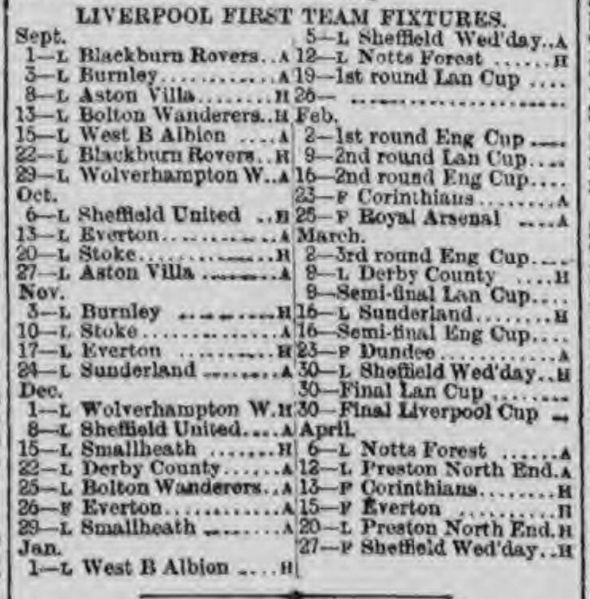